Hiya! I know,  it’s been a while since I’ve written here.

There are reasons! Since coming home from ConcCoction I’ve been BUSY. Focused. Working hard on revisions to Sharp Edge of Yesterday and the new book/new series Ghost Town…

…Yeah, okay, so I’ve been distracted by Dark Life Things ™ and reading a bunch and also I went on a 7-day cruise that was scheduled before the DLT meteorite crashed into the roof of Chez Herkes (metaphorically speaking. We are well. All is well. It’s all resolved, just sad, and…I’ll blog about it eventually.)

I realized while staring at the amazing blue of the Caribbean waters that Spouseman & I hadn’t had a recreation-only vacation in three full years. Cons, yes, but those are fun work. Family visits, yes, but those are…family fun. This was an actual getaway.

Now I’m back  and feeling re-energized, with 76k words of Ghost Town and 2  new scenes of Sharp Edge under my belt. (amazing how much writing time is freed up when I don’t have to think about shopping, or meal planning, organizing, scheduling, or cleaning…and I don’t mean the doing of those things necessarily, it’s the *thinking about* them that I find creatively exhausting. )

ANYway. I’m filing the experience under “Holy wow, I never expected to get to do this in my life, but geez, it was fun!” Someday I will get around to sharing cruise pictures for vicarious travel enjoyment, but it will not be this day.

Please enjoy this picture of  Spouseman & my favorite wedding present. Not the most needed/practical one, nor the one we used most right after the wedding (the bath towels gifted to us by one of my dorm mates hold that place of honor) but it’s the gift we hold dearest, going on 33 years post-ceremony.

Yes, a kind woman from my church congregation hand-sewed it and gifted us with a quilted stuffed animal. (St. Paul’s Episcopal church in Richmond Indiana. Altar Guild, represent!)

The toy came with a card and some cash (which helped pay our rent in that first lean year of our first scrappy decade) and in the card was written the most important marriage advice we received, hands-down:

“Always keep a little whimsy in your life.”

We’re still plugging along, me & Spouseman, and we still have Kitty to remind us that whimsy makes the world a better place.

That’s all the all for now.

Here be two story nuggets I need to put somewhere I can’t lose them. This way I can come back to them when I get the itch to do a short story later this year (which will happen, it seems to be an annual, seasonal kind of thing like hay fever)/

First, one about a young woman, poor and desperate,  who lives in a land where passing ghosts freeze solid in the winter and brave hunters harvest the souls for…I dunno what, but I know this will be somewhere near the beginning:

The music of winter rolled across field and forest during the dark months.  Snow and ice crunched loud underfoot, tree limbs rattled and cracked to pieces, and bitter storm winds howled their harsh melodies down every chimney while snow whispered rippling descants around the walls.

Everyone huddled close during those long, cold months, and they sang their own songs, long stories of winters defeated and warm summers to come. They sang of hopeful things, knowing the wild music was the sound of survival.

When the skies cleared and the the ice moon shone down bright on a still, silent world, the night air turned so cold it froze the dead and the living alike.

Sometimes, when that stillness held the wilds hostage, a careful listener would hear the rare, delicate chime of spirits shattering against snow.

Then there’s a short story in the Rough Passages universe that I know will start off with this gross little bit:

The black, furry thing by the side of the road was the size of a refrigerator, smelled like a landfill, and had entirely too many flies buzzing around it for Jane’s comfort.

“Hey, Janie, look!” Her sister poked it with the trash stick. The thing squelched and deflated to half its original size with a soft, messy noise, and the stench of decay made Janie gag.

“Ew, Megan, what are you doing?” She backed away fast–too fast.  The shoulder of the road was narrow, she wasn’t watching her footing, and her heel slipped off the graveled edge onto slick grass.  She flailed for balance, then desperately flung herself forward onto hands and knees.

She landed with a jolt of pain, but it was better that than sliding ten feet backwards into the muddy weeds at the bottom of the ditch. Her sweaty, filthy, too-large leather work gloves saved her from scraping her hands raw, but her knees stung through her now-ripped jeans.

She brushed at the sticky, yellowish ooze. Her stomach lurched, and disgust prickled all along her skin. “Megan, it’s a good thing we’re family, or I would kill you. First you get caught shoplifting like a juvenile delinquent and blame me so we both have to do community service, then you pick trash duty of all the ungodly things under the sun, and now look at me?”

“What?” Megan kept her eyes on the dead thing as if mesmerized by its ugliness. She poked at it again with the stick. “I wonder what happened to it.”

“Stop it! Who cares?” Janie got to her feet and caught Megan by the arm. “Come on, we’re way behind the rest of the crew already.”

“Who cares?” Megan jerked loose and dug in her heels.  “It’s huge. We can’t just leave it here.”

“Yes, we can. We’re supposed to leave road kill for the crew with the shovels. WHAT ARE YOU DOING?”

The last part came out in a shriek as Megan pulled off her work glove to lay her palm flat against the thing’s hairy side.

It gathered three legs under it and lurched upright, dangling half of a fourth limb, dripping fluids, and sending the swarm of flies into angry flight. When it shook itself, bits of fur, flesh, and gravel flew in all directions. It wobbled unsteadily  down the steep slope into the ditch and disappeared into the tall grass at the bottom.

Janie shrieked again. “THAT WAS THE GROSSEST THING EVER! GROSSER THAN YOUR HOME BIRTH VIDEO. OH. MY. GOD. WHAT DID YOU JUST DO?”

Megan was staring at her own hand. “Uh. I’m not sure, but I want to do it again?”

Unfortunately,  I have no idea what’s going on with these two, beyond Meg rolling unexpectedly into a power that animates dead things. Oh, well. More will come eventually, I’m sure.

Say hello to Jack Coby, Kris Stanislav, and Amy Goodall, from Rough Passages. (What is Rough Passages? YOU know. That’s my book. The one you can buy by clicking here or by clicking the cover picture in the left-side column. 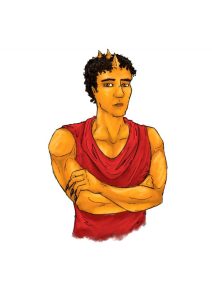 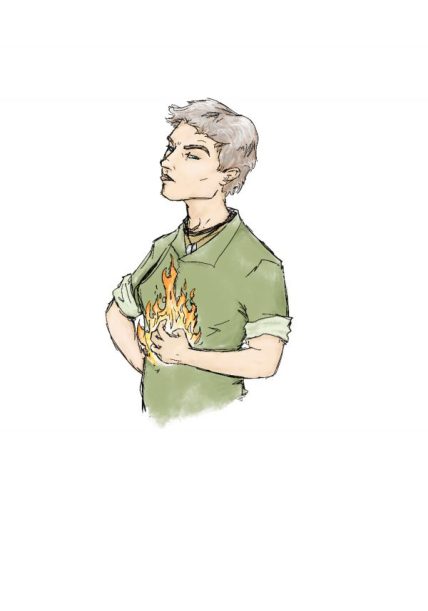 art by Toni Johnson
Many thanks to Toni Johnson of @ToniJdotcom for these fantastic visualizations! If you want to know more about the characters, check out the Character Art Page for descriptions and biographies.
I’ll be using these illustrations to make collectible cards for all my Rough Passages stars, so expect more developments in the months to come.