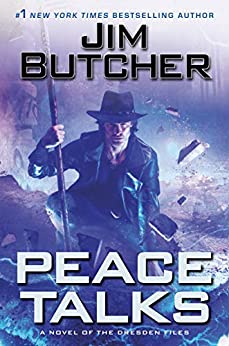 I received an ARC of Peace Talks by Jim Butcher through NetGalley. The one drawback? I’ve already read it, so now I have to wait longer before I can read the NEXT book.

Peace Talks is (will be?) a solid entry in Jim Butcher’s Dresden Files series, but it wouldn’t stand well on its own even if it wasn’t novel #16. It concentrates on setting up big-picture conflicts, and it ends on a chapter-break cliffhanger of epic proportions.

True confession: I loathe cliffhanger endings with the fiery passion of a thousand burning suns. I have quit following series after being subjected to gotcha cliffhangers.

I enjoyed Peace Talks despite the lack of ending, which says good things about Jim Butcher’s ability to sort out plot points in a satisfying way.

It’s been five years since the last book released, and at least two since I did a series re-read, but I was immersed from page one, like settling into my comfy chair after a long trip away from home.  Peace Talks has all the fun elements I’ve come to expect from a Dresden Files novel: Harry demonstrates the self-awareness of a kumquat but is shepherded to A Revelation by his friends;  scenes bounce from snarky dialogue to tender affection to outrageous hijinks and back; and conflicts of duty, honor and heart-ties abound.

A sense of Impending Events hangs over every small moment, and the plot was a typical Dresden Files rollercoaster, careening from one disaster and/or painful, no-win decision to the next.  By the end, when some elements were resolved, it felt like reaching the eye of a hurricane, a welcome breather for characters and readers alike.

I think that’s the main reason the cliffhanger didn’t bother me. I was ready to set down the book and take a break from the intensity.

I was honestly ready for a break from Harry, too. Peace Talks also has all the usual sketch-stereotype Dresden Files characters and the main characters make a lot of problematic value judgments about sexuality, race, gender, consent…yeah.

One of the things about the series that keeps me reading is that it doesn’t shy away from moral conflict, but that doesn’t make it comfortable, especially when the murkiness is presented in first person POV. Things are getting darker and darker, and Harry’s choices are getting…iffier and iffier. So. Break good.

And here’s a third reason the cliffhanger didn’t bother me: events in this series have been heading toward a cliff for several books now, so I’m more inclined to forgive it reaching one it had to jump off. Despite all the action, the plot of Peace Talks was mainly setup. All the various characters who’ve been introduced (over what, sixteen books?) are shifting into new ( and final?) configurations.  It isn’t a short book, but to break out yet another analogy, it only had enough pages to show the opening moves in a chess match that may take the rest of the series to resolve.

So brace yourself, because major shenanigans are about to ensue.