Mid-February is made of Gray & Cloudy

My brain is on rebound from extraverting all weekend. My Third Capricon was a BLAST, but experience will get its own post a bit later, after I’ve had time to sift through impressions and let them settle. Right now all I have to offer are a couple of Thinky Thoughts.

One observation gleaned from cleaning out my Facebook post closet: I use online media to micro-blog. That is, I post personal updates as a life archive rather than to build a public scrapbook. My review of past performance confirms Facebook used to be excellent for mini-blogging but has grown progressively suckier in that role on a curve sorta like this: 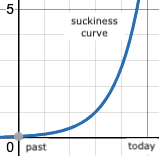 Facebook wants me to pay for visibility AND makes older posts nigh-impossible to review and remove or search?

And book stuff? That I do everywhere. Revisions to Sharp Edge are moving along at a good clip now, so…keep fingers crossed for release or at least pre-orders by late summer.

Gen Con. I want books or at least something to put in people’s hands by Gen Con. I know someone investigating the idea of reading chapters aloud to post  YouTube. There’s something strangely appealing about this idea.

But that’s enough for now. Happy reading, and enjoy this springy picture.